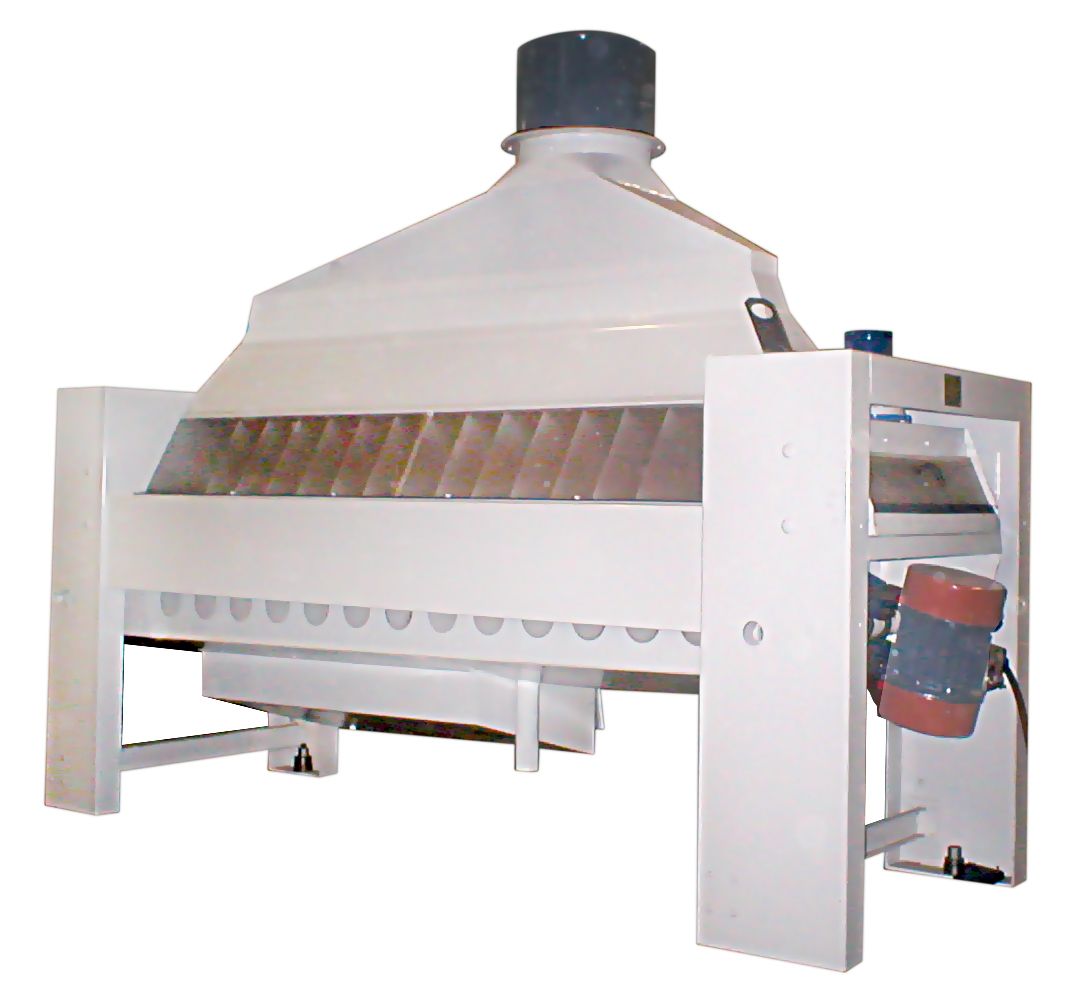 Grain classifier consists of the screen body, which is suspended on four suspensions with 15º±0,5 slope angle to the vertical. Body consists of two sidewalls connected by cross bars and braces, and in the lower part – by two collectors. Slideway railings for screen frames and opening for air intake, which are covered with mesh, are installed in the side wall of screen body. Screen frames are clamped by fixed stop and two spring-loaded levers (fig.2).

Intake device 2 connected with inlet nozzle 1 by sleeve filter provides grain supply to the screen body and its distribution along the entire width of screens. Screen body 3 vibrations drive shuttle-type electromechanical vibrator fixed on the front bar by two cylindrical rubber-metal dampers. Aspiration chamber 4 is divided into 14 sections. Valve for adjustment of aspiration regime in grain classifier over the screen space is placed in the upper part of each section. Quick detachable small inspection windows are placed on the side walls of aspiration chamber for observation of operation process. The required rarefaction in grain classifier is set by the nozzle control valve with lever. Screen frame 8 is equipped with lever mechanism. It can manually adjust the slot for remove of fraction that failed to come through screen.

Machine operation process is as follows (fig.3). Product supplied to the machine through inlet nozzle 1 and intake device 2 is uniformly transferred to the first screen frame. Due to the directional body vibrations and aeration, grain while moving along the first frame 7 (mesh diameter 2 mm) is fluidized and self-sorted according to layer thickness: heavy fraction is concentrated in the lower layer part, and light fraction – in the upper layer part. Heavy fraction differs from light fraction by higher density and weight of 1000 grains. Undersow is separated through the screen (as a product that comes through screen) on the first screen frame 7. It consists of sand and broken grains. During grain motion along the second screen frame 8 with openings diameter 9 mm, heavy grain fraction from lower layer is sifted at first, and then mixed fraction, composed in the result of screening, along with the part of heavy fraction and lighter fraction (from the upper part of “fluid bed” layer). Heavy and mixed grain fractions are separated by the control valve 9. It is placed in the collector under the second screen frame 8.

Light fraction, less valuable (by density and weight of 1000 grains) grain components and hard-separable impurities, is product that failed to come through screen of frame ą2 8. Tailings from the first and second screen frames are combined and directed to the processing. Heavy grain fraction is removed to the indented cylinder separator for short impurities separation, mixed fraction – to the intensive grain scourers. To achieve optimal capacity and high technological efficiency, it is necessary to ensure uniform feed of grain mixture to the machine and its uniform distribution along the entire screens surface, adjust aspiration regime and amplitude of the screen body oscillations. In order to achieve uniform grain supply, it is recommended to install automatic flow measuring device – grain flow control device – in the feed gravity pipe, and install the bin with storage capacity about 1,5 m3 in front of it.

Amplitude of the screen body oscillations can be adjusted by shifting upper and lower weights relative to each other. They are installed at the both ends of the electromechanical vibrator shaft. Oscillations amplitude is determined by the progress indicator located on the body side wall. Careful regulation of the aspiration regime provides optimal layer thickness on the entire screening surface of the screen. Grain layer must be “fluid bed” along the entire screens surface, but not as strong to torn in some areas. The slot for product that failed to come through screen on the second screen frame 12 is also adjusted to this effect. Slot narrowing creates necessary grain support. Grain layer thickness should be so that the screen perforation was not visible. If there is a large amount of proper grain among the product that failed to come through screen, it is necessary to close (completely) air valve in the last section. If it is not enough, air valves in the sections ą14, 15, 16 and 17 are slightly closed. Rarefaction in the classifier is adjusted by throttle valve. Their technological efficiency is periodically tested during classifier operation process. In case of its reduction, first of all, screens must be inspected and cleaned, worn-out cleaners must be replaced by new ones, aspiration regime must be adjusted. Correct selection of kinematic parameters influences classifier efficiency and throughput capacity. In case of machine vibration and unusual knocking, it is necessary to check the correct installation of the vibrator and tighten the tension bolts. Failure of the bumpers or loosening of the machine fastening to covering may also cause vibrations. In this case it is necessary to replace the bumpers or to tighten the bolts.