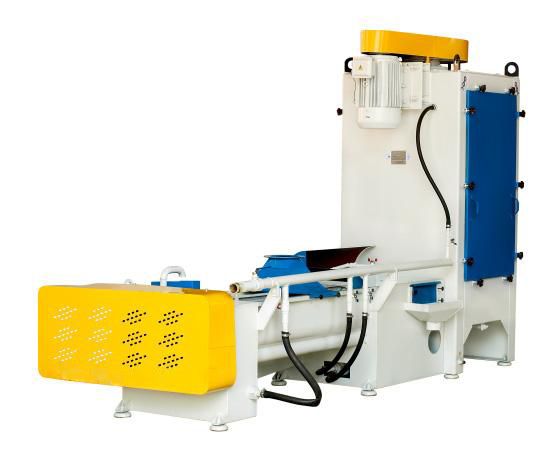 Washing machine KVD-1 is designed for cleaning the surface of grain and separating impurities from it that differ in hydrodynamic properties. Scope of application - groats shops of bakery factories, agro-industrial enterprises and farms.

Washing machine KVD-1 is designed for cleaning the surface of grain and separating impurities from it that differ in hydrodynamic properties. Scope of application - groats shops of bakery factories, agro-industrial enterprises and farms.


Device and work
The washing machine consists of a washing tub 1, alloy chambers 2 and 3, a pressing column 4(Fig. 1). The washing machine is equipped with a water distribution comb - a collector with control valves :
·              valve 26 - for water supply to the comb;
·              valve 24 - for water supply for flushing the centrifuge sieve;
·             valve 29 - to fill tub on by water and to make mineral impurities go out;
·              two valves 25 - for supplying water to two injector pipes to the floating chambers 2 and 3;
·               valve 23 - for supplying water to the tube pipe of the bath.
The washing bath looks like body in upper part of which located horizontal augers 5 for grain transportation to the pressing column. In the lower part, there are horizontal augers for transportation of heavy mineral and metal impurities to the water-destoner 7. The drive 8 makes augers rotate. The nozzles 9 and 10 are installed to supply water to the washing tub.
For a stable supply of water to the washing machine and ensuring the passport operation parameters, it is imperative to provide for the installation of a pump. This pump will allow to regulate the water consumption depending on the required washing capacity from 1 to 6 tons per hour. The minimum pressure generated by the pump must be at least 2.5 atm. at any water consumption. The fusion device consists of two chambers with a device for hydraulic grain transportation to the pressing column. Transportation takes place under the pressure of water supplied to two injection pipes at the bottom of the chambers. The fusion device has a window 11 for waste disposal. The pressing column consists of a body 12, a sieve cylinder 13, a rotor 14 with hammers 15 for vertical movement of grain, a branch pipe 17 for removing washed grain, a rotor drive 18.
The principle of the washing machine next, grain through the supply nozzle 19, in a uniform flow enters both grain augers immersed in water, and in a suspended state is transported to the first fusion chamber 2, where the process of stratification of the grain mixture by density takes place. The bulk of the grain with the highest density and due to a decrease in the speed of water sinks and is transported through the injection pipe to the pressing column. Light impurities float up and periodically through the window 11 are removed from the machine. The rest of the grain, which was not sufficiently wetted, moves to the second fusion chamber 3, where it undergoes delamination, which prevents normal grain from getting into waste. Full grain is transported by the injection pipe to the pressing column.
Don't allow waste water to be recicrulated to the injector without first cleaning it in a thin - layer sump!
Light  weight impurities, as well as damaged kernels and other impurities are removed from the floating (fusion) chamber. Stones, sand and other mineral impurities sink to the bottom of the bath and directed by the lower augers into the water destoner, from where, under the pressure of water, discharged into the collector through a special pipeline, and the waste water is poured back into the bath through window 27. In the pressing column, the grain is captured by whips and during vertical movement is pressed against the mesh shell, where, due to centrifugal forces, mechanically retained moisture and crushed kernels are separated from the grain, pass through the sieve and removed from the column. During rotation, the rotor absorbs in air, which dries the grain and blows through the shell sieve. At the outlet of the pressing column in the upper part, the mesh shell has a smooth surface, which excludes peeling and crushing of grain when it is discharged from the hammers into the outlet pipe. The machine equipped with a nozzle 20 with holes, through which foam is quenching in the fusion device. In the upper part of the pressing column located an annular tube 21 with holes, through which the outer surface of the screens of the shell is washed with water from dirt and crushed grain. Regulation of the amount of supplied water carried out by valves 23, 24, 25, 26, 29.