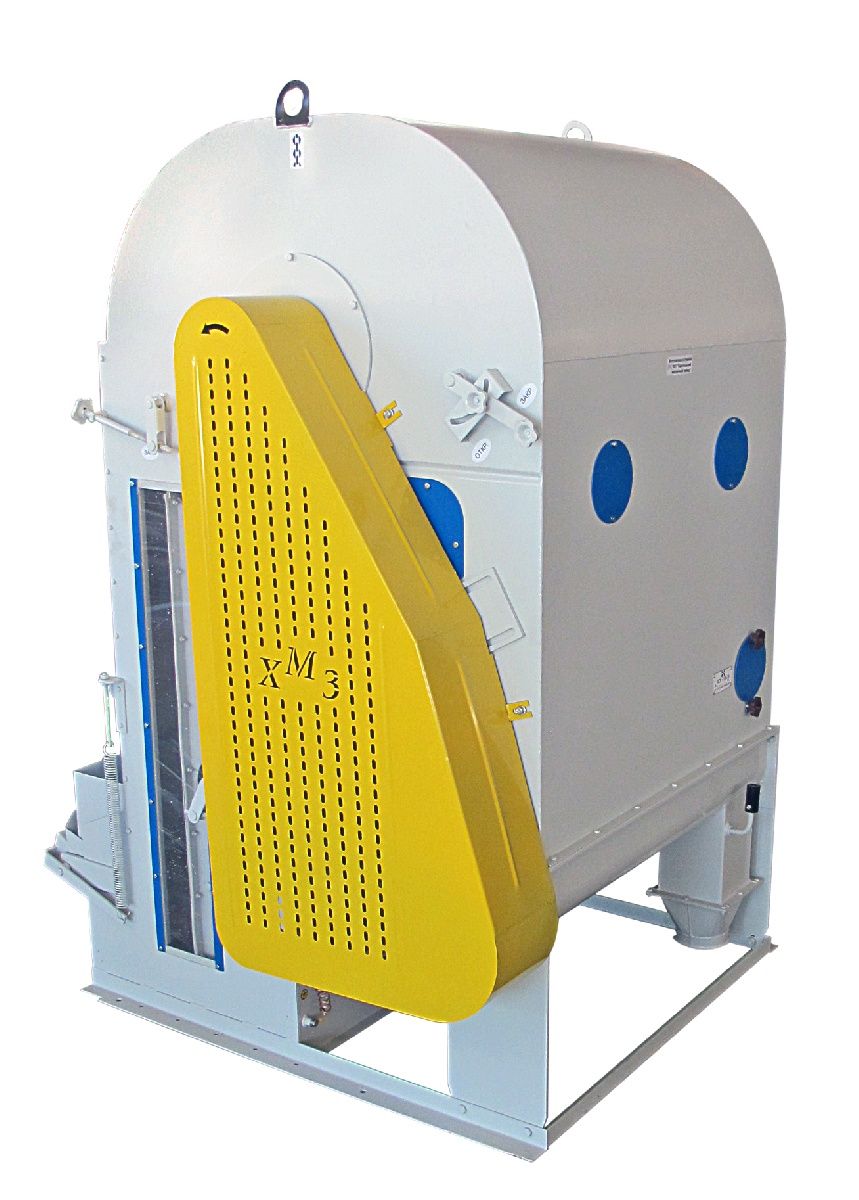 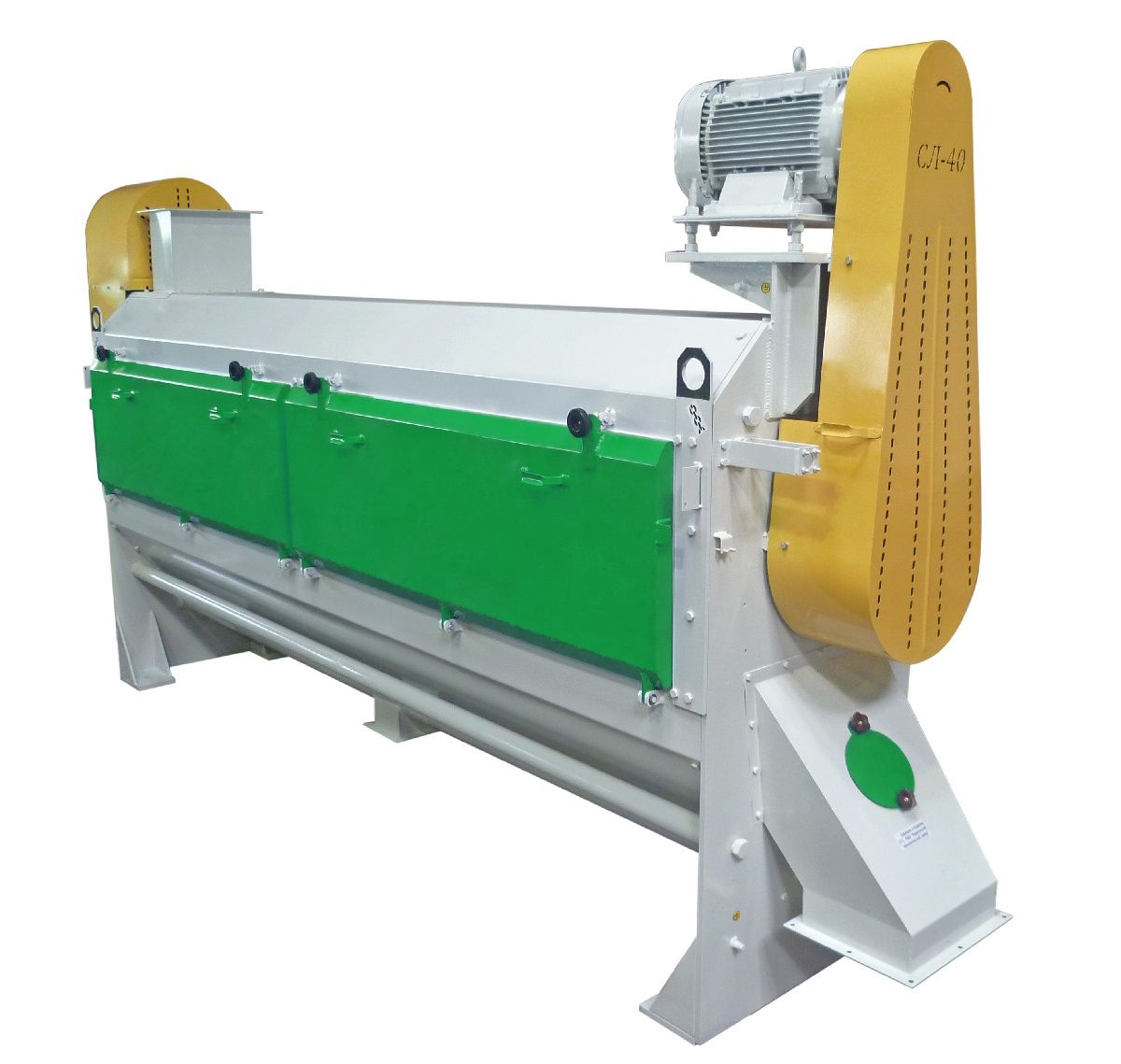 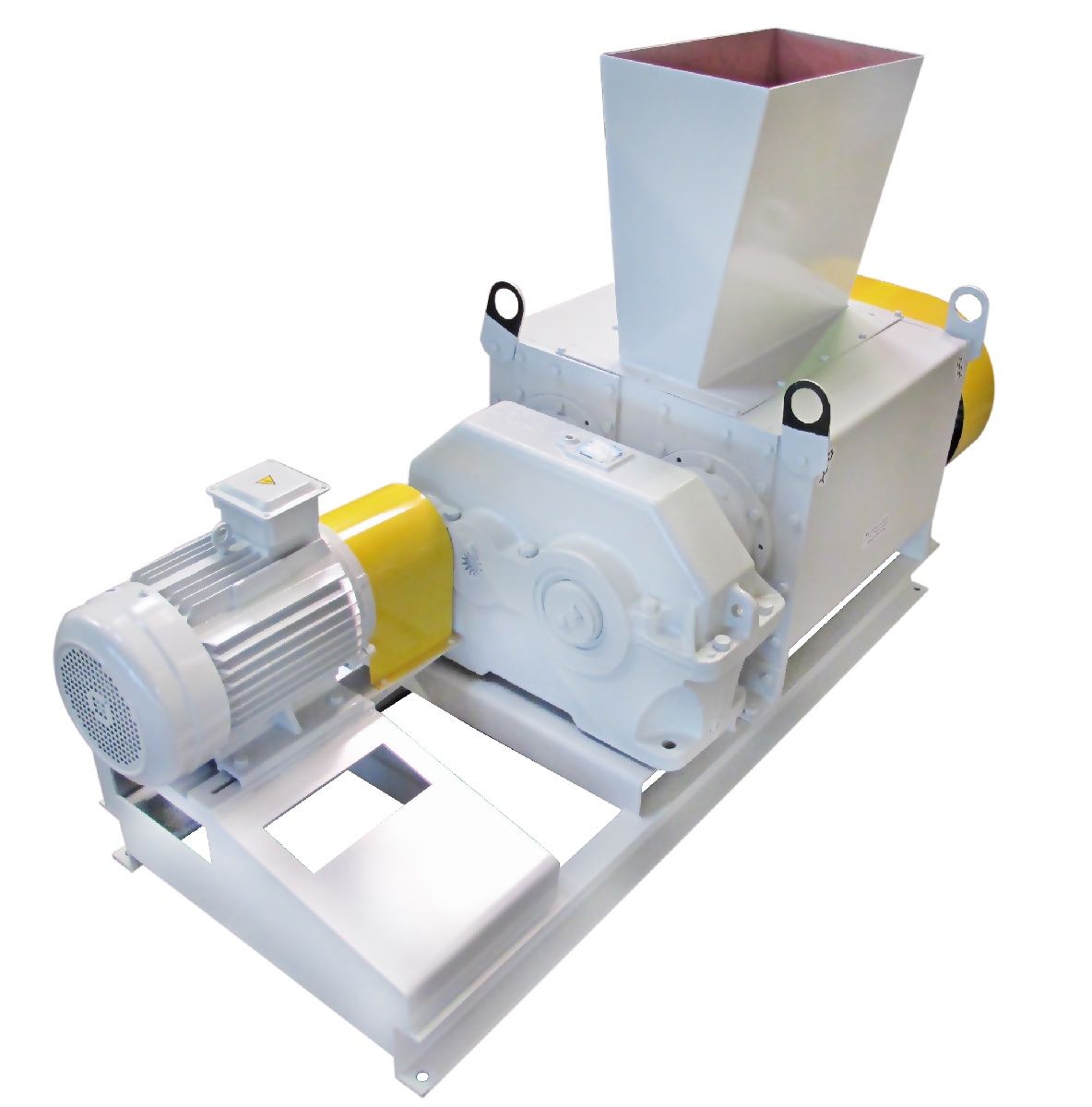 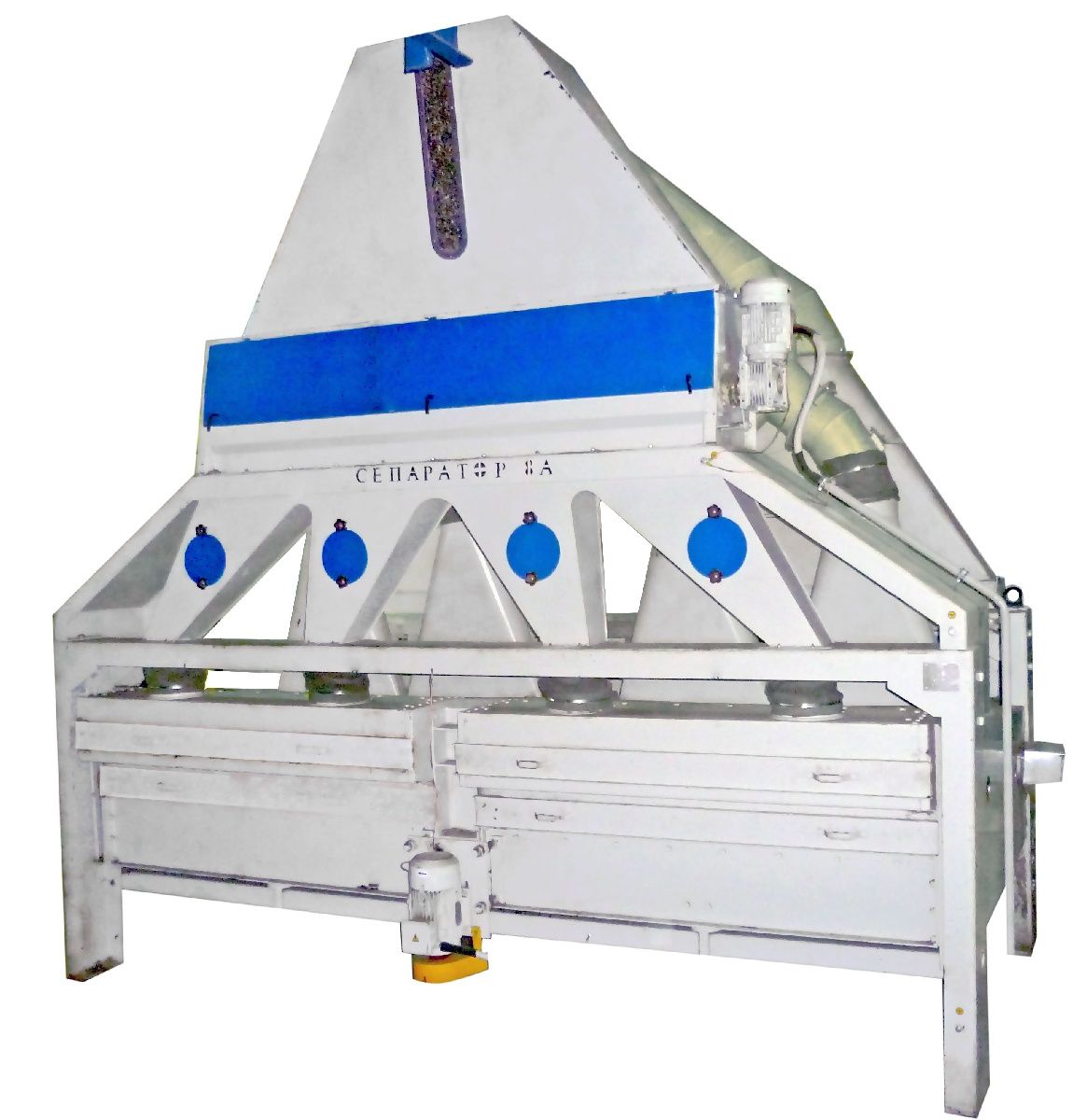 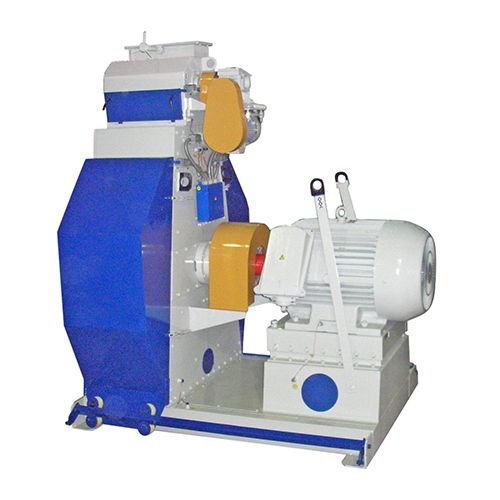 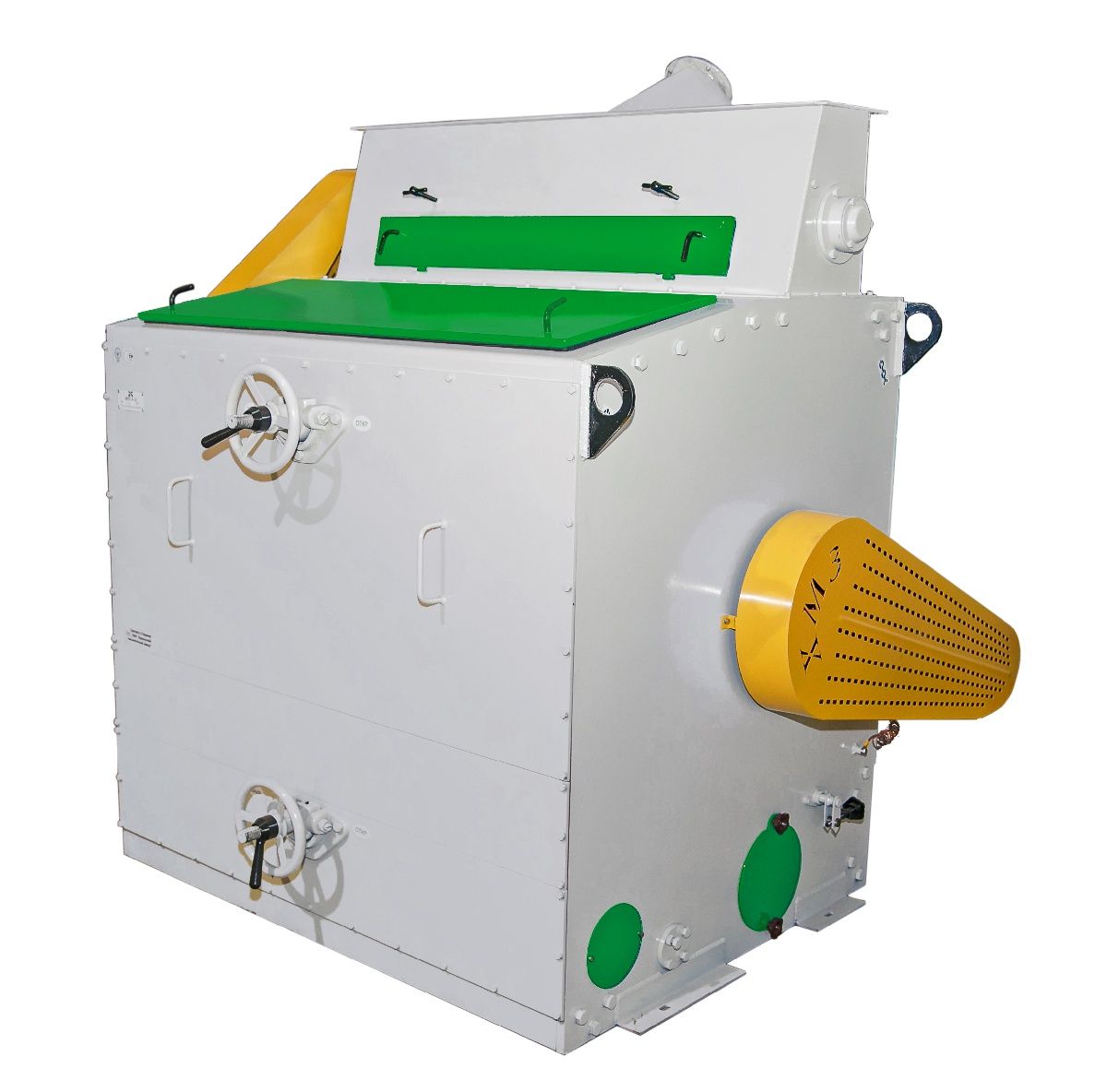 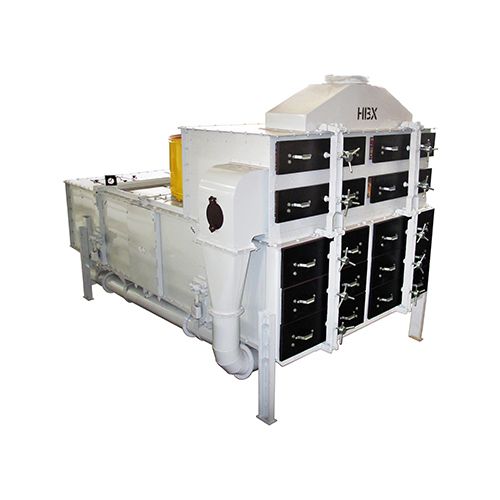 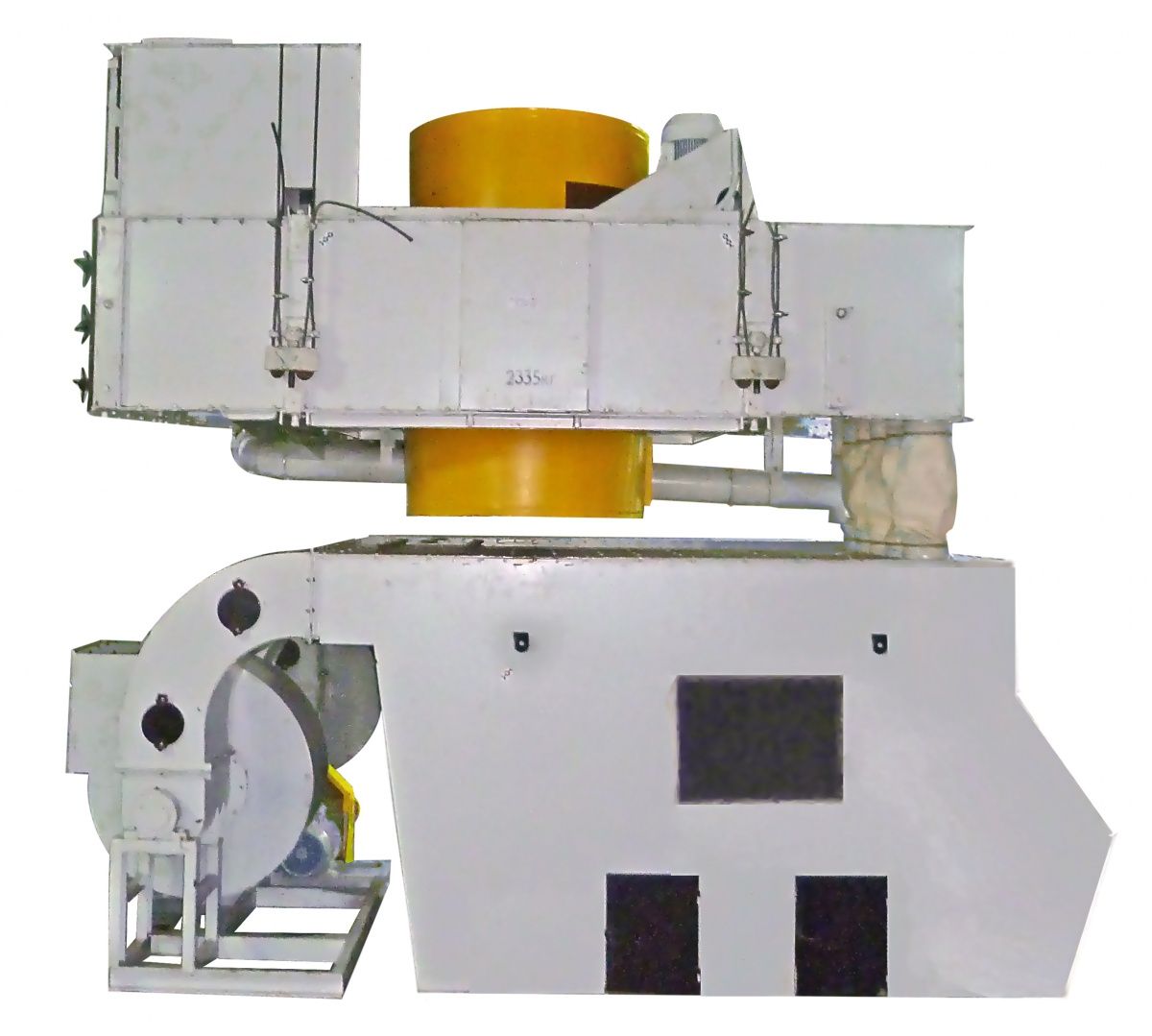 Science-based principles of dehulled product separation on hulls and kernels (meats) on the basis of size range and aerodynamic properties difference are at the heart of this seed dehulling machine NVH type design. A lightweight hull with bigger surface area and lower weight shows higher sailing capacity in the air flow (the movability in relatively low air speed) than a kernel. That is why if dehulled product contains hulls and kernels particles of the same size, they can be clearly separated in the air stream due to their significant difference in sailing capacity.

The dehulled product coming out of dehullers (NRH or RC-200) after dehulling of sunflower seeds represents a mixture of different by size particles: large, medium and small hulls, unhulled and partially hulled seeds, kernels (meats), half kernels (damaged kernels), small hulls and kernel particles, oil containing dust. It is impossible to separate such complex mixture at once.

Thus, at the first stage dehulled product is separated by linear dimensions in the sifter (with preliminary sifting), on sizing screens to six fractions containing hulls and kernels (meats) particles of the same size.

At the second stage, in the machine aspiration part (purifier) from the calibrated dehulled product fractions in down coming air flow (each fraction in the separate channel with controlled air flow) hulls particles are separated from particles of partially hulled seeds, damaged kernels and kernels due to different aerodynamic properties of their sailing capacity.

The smallest fraction (product that passes through Ø 3 mm screen), which contains very small particles of crushed kernels, mostly without hulls (oil containing dust), is not separated in the air flow, it is directed to kernel fraction bypassing the purifier, as even at low speed of air flow, oil containing dust will be moved along with the hulls and the separation will not happen.

Machine (fig. 1) consists of purifier 1, purifier drive 2, sifter 3 with preliminary sifter 14 and pipe 4, which is not blown by air.

Purifier is an aspiration part of machine. Across the width the purifier is divided into five independent chambers. Each chamber has three cone parts with adjoining overhead valves 6 for hulls removal; valves 8 for control of vented air quantity; feed valves 19.

Sifter is represented by a metal body mounted on ceiling frame by four steel wire ropes 9 turned over supporting blocks 10. The frame is fixed to roof with bolts. Wire ropes are fixed to the sifter with locks 11 and slips 12. Three layers of screen frames 13 are located inside the body.

Preliminary sifter 14 with two layers of screen frames is located in the front part of the sifter (overhead). Inlet nozzle 15 of preliminary sifter is connected with a fabric gravity sleeve that delivers product to the machine.

Lead box 16 with overflow valves is located in the rear part of the sifter. Sifter outlet nozzles connected with purifier inlet nozzles by fabric sleeves 17 are located under lead box.

Bearings are installed in the supporting frame (traverse). Shaft with balancers 18 rotates within bearings. The shaft rotation is driven by electric motor via V-belt transmission.

The dehulled product after preliminary sifter comes to long upper screen with Ø 6 mm holes (2/3 of layer length) and moves to the purifier front part. The smaller particles of dehulled product pass through the screen and by (through) screen chute are removed to the second layer screen; the larger particles after long upper screen come to Ø 7 mm short upper screen (1/3 of layer length), where the largest particles (large hulls, unhulled and partially hulled seeds) come as a product that haven’t passed through screen, forming the first dehulled product fraction and is removed to the first purifier chamber. Product that passed through the short screen forms the second fraction, which is removed to the second purifier chamber.

Screen chutes are installed on the first and second layers of 2/3 screen frames, in order to reduce the time of oil containing dust contact with hulls that reduces oil loss with hulls.

Each of five product fractions removed to the purifier fall to the designated chamber, where the product is purified by air flow and hulls are separated from kernels (meats) according to difference in aerodynamic characteristics.

The aspiration chamber has five air ducts for dehulled product processing. Dehulled product fractions received after the sifter come to the air ducts. Each duct is divided into three parts: receiving, settling and outlet.

The receiving part is equipped with stepwise located four shelves (shutters) made of sheet metal. Slots for air intake from the production facility by fan are designed between shelves. Shelves are set at an angle 30-35° to the horizon.

Each dehulled product fraction enters into the top shelf and then by gravity pours from shelf to shelf. Air flow penetrates falling dehulled product layer and removes the lighter particles (hulls), while kernels (meats) free from hulls fall from the last shelf. Shelf angle can be changed due to purifier operation adjustment: the steeper shelves installed, the faster dehulled product is poured over them, the shorter air treatment and the less hulls selection from dehulled product.

The settling part of aspiration channel consists of three cones (pockets) with valves for removal of products and vertical baffles for changing direction of air removed hulls particles. The air flow is created by the fan. In order to control air conditions (air speed) each duct is equipped with gate valve, which position can be changed from the side of purifier receiving part (where shelves are located) using a hand wheel and wire rope cable.

After passing between shelves air that removes hulls enters to the expanding over the first cone (re-purifying) part of aspiration channel. Air speed decreases and in the first cone, in case of inaccurate separation by aerodynamic characteristics, large hulls and kernels, partially removed by air flow along with hulls, are settled together. When operating regime is correctly adjusted, the kernel (meats) content in first cone shall not exceed 1-2%. The fraction settled in the first cone should be directed to re-purification and that is why it is called re-purified seeds.

Hulls that were not settled in the first cone are removed by air further and pass between vertical baffles over second and third cones. Hulls slow down and settle by hitting at cones. Hulls movement slowing is carried out due to increase of aspiration channel cross section over cones, resulting in hulls settling in second and third cones of aspiration chamber. Air that contains very small hulls and, possibly, small kernel particles (oil containing dust) is removed to cyclones through fans.

The air speed in channels is adjusted by bigger or smaller gate valve opening, by changing the height of regulating valves and inner baffles, shelves (shutters) inclination to horizon. The purpose of such adjustment is deficiency of kernels in hulls in second and third cones (to prevent kernel removal to hulls).

Re-purified seeds are removed for re-separation to special control dehulling machine, which differs from the operating one by screens holes size and air conditions in aspiration chamber.

Hulls coming out from hulls cones are separated into hulls and kernels (meats), at first on the separately designed sifter and then in aspiration chamber. Further, hulls are removed to the storage and kernels/meats (plus kernels from the control dehulling machine) are removed for crushing.

If aspiration part is operated properly, dehulled product samples taken from 1-4 shelves sections should not contain product that passed through 3 mm screen. If there is such product in the first section, it indicates that machine is overloaded, in 2-4 sections – sifter operates unsatisfactory in the result of improper selection of screen holes size.

Special seed dehulling machine (NVH) for fractionation of dehulled sunflower seeds is applied only at the post-Soviet region.

All censorious remarks to NVH can be limited to only 2:

There is no ideal process. In theory it exists. In the real life it does not. Everything is relative. Our process can be compared with the only competitive process solution – two-stages front-end dehulling on cleaning/screening machines and separators used by “Buhler” or “Allocco”:

There are numerous theoretical concepts that try to solve a problem with additional oil treatment of hulls:


There are even some working complexes, but:

Only such technological process provides an opportunity to reach the following quality indexes in commercial production:

Above-mentioned average indexes are calculated for mixed raw materials (commercial mixture) without preliminary grading. After grading, processing of homogeneous raw materials bulk or operational regulation of dehullers and dehulling machines options during production process, the following indexes can be reached:

As the long-term experience of hundreds of old and new oil extraction plants operation shows, the technological process of sunflower dehulled product separation for obtaining kernel fraction with max. 10% hulls content based on NVH dehulling machine is unchallenged. And as the plant that has manufactured far more than 1000 machines since 2000 year, we can declare with confidence that there are advanced high-quality machines produced in our country.

A basic circuit arrangement of dehulling machines R1-MST, R1-MS-2T (prototypes of NVH) was developed decades ago and proved its efficiency, but time passes, new materials and technologies develop, operation experience accumulates and our plant constantly improves construction involving professionals from leading research organizations. The examples of such researches are shown in the tab “Materials”.